I know my posts are few and far between but this is to get something off my chest.

Drivers in Saskatoon are terrible.

Lets start with a small sign quiz. You should know all of these.
1. 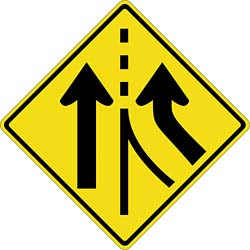 1. Obviously you should know this one. It is a stop sign. It means you should stop. I'll touch on stop signs more later. For some reason these still seem to be a mystery to people.
2. This is a yield sign. This means you have to slow down and check that it is safe to proceed. This is not a free pass.
3. This is a center turn lane sign. Most people seem unable to figure this one out. No it is not a passing lane nor is it another driving lane. This lane is for turning left. Don't be stupid and drive in this lane, you've got the possibility that someone is driving towards you from the opposite direction.
4. This one says what it is but no one manages to obey it. The left lane is for passing. If you are going the speed limit you could still be "slower" traffic. Stay in the right lane. It is not your job to make sure people go the speed limit. Just drive to keep your self safe.
5. Here is a hard one. This is an added lane sign or a free flow lane sign. If you are making a right turn under one of these signs it means you have your own lane to turn into. DO NOT STOP. I can't emphasize this one enough. You do not have to stop and think, this is like a merge without other traffic.
6. If you see this at a 4 way intersection it means everyone has a stop sign. Just stop and go. You do not have to stop and wait for the other guy to stop before going. This does not mean you shouldn't pay attention to the other people. You need to know the rules of the road.
7. I just threw this in to see who's still paying attention. It means the pavement is going to turn to gravel. You'll see lots of these in Saskatchewan.
8. This one works with #4. You need to drive in the right lane. If you suddenly have a new right lane, that isn't a turning lane, you should be in it. These signs are usually found going up hill so faster cars can get around slower large vehicles.
Ok now for a few specific rants.
Four way intersections. No matter how these are controlled they seem to mystify the general public. Lets ignore traffic lights because most of you have a handle on those. Lets start with the most basic type, an uncontrolled intersection. The rule here is "right of way". This means you yield to the guy on the right. This does not mean you blast through it and hope, this does not mean you stop completely and then go. There is no need to stare blankly at the guy on your left and wave him through, you have the right of way. Simple, no? Right of way means the person on your right has the "right of way". A four way stop is similar but different. The guy that stops first has the right of way. If you stop at the same time the person on the right has the right of way. If you stop at the same time but you are turning left and the other guy is going straight through, he has the right of way because you are crossing oncoming lanes. It is a little more complicated but is still simple logic for humans. Stop being afraid of stop signs.
The added lane sign. Perhaps this is a new sign to Saskatoon but sweet zombie jesus it is not difficult to understand. It means shut up and drive. Do not stop and think about it just go. Be kind to the people behind you and just drive. I don't know how I can make this any simpler. You do not have to merge but for the love of god don't stop. Stop being an asshole and stop trying to merge into one of the other lanes when you have one of these signs facing you. The whole idea is to speed up traffic. I can't count the number of times I've seen someone stop, look, wait, merge into the center lane and continue straight down the road. You could have eliminated everything and just continued down the right lane and lane changed later. This would have saved everyone time and prevented a whole line of traffic from having to stop.
This brings us to merging. For fucks sake don't stop at the end of a merge lane. You are asking to be removed from this world by a fast moving truck. Also do not merge way below the speed of traffic. This seems to be difficult for anyone over 25. You NEED to be going the same speed as the faster traffic in order to safely and smoothly merge into it. Again this is not a complex concept. Learn to love your gas pedal and just put the hammer down. Do people not realize how dangerous it is to stop on a merge lane?

Now here is a sign that seems to have everyone completely dumb founded. 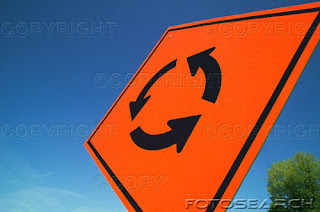 This is a traffic circle sign. We have one traffic circle in Saskatoon and it is a source of constant entertainment and frustration for those of us that can figure it out. Please stop being ignorant and just ask what it is and how you do it. I've seen too many people go the wrong way around or even try to drive through the middle. Follow the arrows. The issue most people have is they have to yield to the left instead of the right. Ok its a little odd but it is not rocket science. The person in the circle has the right of way and the person entering has to yield. Think of it like merging into the circle. Then you simply go around the circle and exit where you want. Yes I realize that sometimes this means you have to go the long way around but stop going the wrong way.
Do you know why this rant exists? It exists because our driver education is a joke. My driving education was 4 in car drives and the exam consisted of 5 right turns, 5 left turns, a couple lane changes and a parallel park. I'm pretty sure that driving dog on tv could get a license in Saskatchewan. More time as a learner and more probation will not fix this. As a learner you learn the bad habits of your family and friends. You will not be able to elevate yourself to the level of a good driver if everyone teaching you cannot figure out a traffic circle. It should cost you more than $25 to get your license.
Ok that's enough for now. Please put some more effort into your driving and put down the cellphone, burger, newspaper, coffee, and smoke. Won't somebody please think of the children!
Posted by Zack at 8:16 PM

I love the instructions. I see those problems all day long at work driving.

We also have two new traffic circles so watch out people...they are over by St.Joes and the other high school there...maybe it will teach high school students how to use them.

I'm not holding my breath on that though.

Well done!
And you're bang on about the problem being joke tests and exams to get a license. There's no difficulty at all to it, and it doesn't MAKE someone learn something as easy and common as a traffic circle, or a merge.

Correct me if I'm wrong, but it's not legal in SK to change lanes in the intersection, is it? People do this all the time near where I live, and I've seen many near accidents. They assume people in the left lane are turning left when in fact they're going straight onto a street that basically has only one driving lane, the right lane is full of parked cars. So they drive in the right lane and then have to change lanes immediately into the left because the right is a parking lane. I don't think it's because they don't realize they're going onto a street with no right lane, but rather because they're trying to save time and not wait behind left turning drivers. When the left hand driver is actually going straight, and the car on the right is even with them and tries to go into their lane.. lots of honking, usually. I haven't seen a smash-up yet.

The only problem I have with this is the under 25 comment. I am 33 and I know all of these. It is not rocket science, but many people in this city have so many bad habits, it is crazy. As Gormley say, make sure that when you buy a car, they sell you the signal light option, because it seems no one in this city has it. When you do signal, people speed up so not to let you in. I lived in Edmonton for the last 3 years, and EVERYONE lets you in. There, if you signal, they make space for you, here, they close the gap. Traffic would flow much better if everyone was polite. As for the left lane, do not get me started.

Yes Greenfilter, it's not legal to switch lanes in an intersection. I do think most of the time it's because people don't realize their driving lane is going away.

The intersection I was referring to is well-known. People regularly go to a gas station there, and you have to know it's there to go out of your way to get there, so I don't think it's ignorance, at least not at that particular place.

I agree with the comment from anonymous. A selfish driving "community" just means everybody has to go slower and deal with more stops and starts. My husband is European and apparently they really emphasize not interrupting the flow of traffic in his particular country. People still do stupid things though, like drive up the empty lane in a traffic jam where one lane is cut off, and then expect to be let in at the front. Then again, they get traffic jams on the highway there, so I guess at least that's one advantage of living here.

Sorry anon but I was generalizing in regards to age.

The old saying is that if you see a signal light being used in Saskatchewan it is because it was left on at the factory.

The traffic circle. Ah...what delight! You don't need to signal going in, so your statement about merging is accurate. However, you do need to signal before exiting. This is so that people attempting to merge can actually do so without waiting for you to go by several times while you make up your mind... Thanks so much for your rant about this.

This is much needed, Zack, so thank you. Not a lot of motorists know the meaning of these traffic signs, and educating them about it can significantly lower the risk of road accidents. One of the anonymous commenters is right; traffic would be better if everyone were polite. I guess we need more yield signs and proper information to establish that.