I went to bridges tonight with Mark, James and Jacqui. Best wings ever. I haven't found better ones in Saskatoon. Everyone should try them once. Its a good place for a drink too. Just remember, Thursday night.
Posted by Zack at 10:30 PM No comments:

For my birthday I got a Stirling cycle engine from my mom. I've made a short video of it running. It is running on a cup of hot tap water and I put an ice cube on the top to help it run faster.

If anyone is interested Howstuffworks.com has a good article on how they work. Here is how it basically works. The water heats the bottom plate causing the air to expand. The expanding air pushes on the work piston. Thats the small piston in the brass cylinder. As the work piston goes up it spins the crank shaft and that pushes the displacer down. Thats the big Styrofoam piston in the bottom. That forces the air to the top where it is cooled by the top plate and contracts. This pulls the work piston down spinning the crank shaft more. The displacer then moves up forcing the air to the hot side and it starts all over again. I bought my stirling engine from a guy in Germany. Their site has some other videos of stirling engines running.
Posted by Zack at 5:07 PM 1 comment: 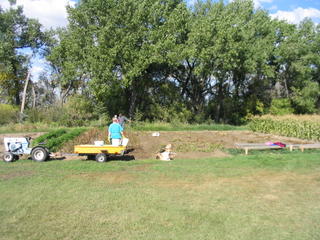 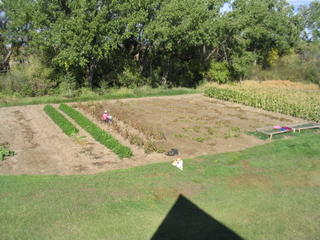 You can see how big the garden is from those pictures. There are actually 2 gardens on the acreage. This one is 60x~250 and the other one is 30x100. My grandparents sell some of the vegetables to pay for the land tax on the acreage.
Posted by Zack at 10:15 PM No comments:

Friday's aren't supposed to be busy...

I was hoping for a lax day at work today, but the computers had a different idea. 2 minutes after getting in I'm getting phone calls about login problems. One of the servers has a dead hard drive. Great. So I lug the damn thing back to my office and it fires up fine. GOD DAMNIT. O wait now I don't have to fix it. Lug it back and fire it up. Everything is fine. Sit back down, chair isn't even warm. The colour laser in the other building isn't working. Down the stairs, outside, up the stairs. Hmmm print job is failing CRC. What could that be? Well I reboot the "print server". Printer works. Good. I say "print server" becuase its an old computer thats running 98 and loaded, I mean looooaaaaaded down with crap. Back in the office. Run some tests on the server hard drive to make sure its almost dead. Seems to be fine so I make a fresh image of it. Well now that I'm at it I'll image all the servers. I realize this is good becuase it hasn't been done in 2 months. Go back to trying to fix the bosses laptop. It self destructed somehow so I reinstalled windows on it. Weird problems though. 2 days ago norton decided to throw up random errors and stop working. OK I'll reinstall it... doesn't work. Now windows scripting and active X also aren't working. Thats odd. Now the net is really slow. OK this is getting really strange. Run a virus scan, nothing. Run spyware scan, nothing. WTF? Now windows installer doesn't want to co-operate. Fuck it. I'll reinstall. So we'll see how my monday goes. I'm sure the laptop won't be quite right and there will be a day or 2 of fixing it more. Good thing friday is over.
Posted by Zack at 9:57 PM No comments:

i just got back from the hospital. Lindsays sister, Melissa, is in there again. They have no idea whats wrong with her. She has headaches and they don't know what is causing them. She's had 2 CAT scans, 1 MRI and a spinal tap. I'm sure she is ready to go home. She seems to have bad luck with her health, I wonder what horrible thing she did in a previous life.
Posted by Zack at 9:31 PM No comments:

So we went to see stealth last night at Rainbow. Hmmm.... what did I think... well I'm glad I had a gift certificate so I didn't have to pay to see the movie. It wasn't bad, its just it wasn't good. I enjoyed the special effects and explosions and stuff, there was just too many things wrong with the movie. Now there are some spoilers here but if you really wanted to see the movie you would have seen it by now.

1. There are 3 pilots, 2 men 1 woman. Now what is the predictable thing that will happen? Yep 2 of them fall in love. Awww.... I wanna puke. Did we really need this? It was just dumb, they tried to put a romantic sub story in a movie about a robotic fighter jet. WHY???

2. Stupid extra scenes. They get some leave and go to Tailand. Again why? Well if they didn't go to Thailand you wouldn't know about the sercret relationship between the 2 of them. Again not needed.

3. Not nearly enough time with the robot. They could have expanded that character a lot more. Its the precursor to skynet. Camaaaan lets get some more info. They do mention that it starts to get feelings and learn about pretty much everything. In otherwords its almost human, and then it sacrifices itself to save one of the humans. Boo hoo no one cares because you didn't give us a reason to become attached to it.

4. Weak predictable story that follows the same cookie cutter plot of every other movie like this out there.

So in conclusion its a 2 out of 5. If you just want to sit back and watch planes fly really, really fast and watch shit blow up, then its probably worth renting or watching at rainbow. On the other hand if you want something that actually has a story and substance, then look elsewhere.
Posted by Zack at 12:38 PM No comments:

Wow I'm looking at a busy weekend next week. Lets see.. Saturday is my birthday, we are going to the acerage for harvesting the garden, saturday night I'm at Lindsay's uncle's birthday party. On Sunday my dad is going to be in town so me, him, my brother and Lindsay are going for dim sum. Jeez I'm not going to get any time to do anything. Between all that and mowing the lawn and other normal weekend cleaning/yardwork I'm going to not get anytime to put my toes up. Good thing it will be a while before I get the valve for my lantern. If that came in on the weekend I'd be in a pickle. I would want to work on that.

Speaking of Coleman stuff, I just got a coleman heater for $5 on ebay. It is a 518B. I'm not sure how old it is but it should do a good job of rounding out the collection. I've also found a gem in my grandpa's basement. He has a Coleman desk lamp that used to belong to my grandma's dad. It is a Coleman 118 desk lamp from somewhere around 1930. Hopefully I'll be able to get that running. I wish I knew why this was so addicting. All my other hobbies are going by the wayside.
Posted by Zack at 10:49 PM 1 comment:

Ah its about time, the re-runs are over. So I go over to nbc.com and look for scrubs. No scrubs.... hmmm.... check some message boards. October? WTF is that? NBC is going to go with their own productions like Joey first. Joey? Give me a break. I've had farts that are more entertaining, and better written.
Posted by Zack at 8:34 PM No comments:

Whew I just spent the whole weekend digging carrots and potatoes. Too bad it was only my small garden and I get to do it all over again next weekend on a much larger scale. I actually kind of enjoy the work, I like gardening. I think its mostly the eating that I enjoy :D. I'm excited about going out to the acerage and helping out with the garden. We should also be having birthday cake for me becuase it is my birthday on the 25th. I'm going to be 23. Man mid-twenties now. I feel old.
Posted by Zack at 10:03 PM No comments:

I've managed to stumble into a new hobby. For some reason I love lanterns.... well basically anything that makes light. Flashlights and fire are fun and a lantern seems to combine the two into one. So back on topic, I was given a new (new to me) lantern by a friends dad the other day. It is an old, rough coleman model 200 lantern. It was made in april of 1952 so I think it would be pretty cool to get it running. I blame my grandpa for getting me started with this. A while ago he gave me a model 335 lantern from 1974 and a coleman camp stove. Neither were in working condition but with a little work they fired up and worked like new. The stove was a little rough, I had to take it apart and clean it. The lantern was in great shape, he had only used it once. The only problem was that it was full of old gas and needed a new mantel. I later discovered the generator cleaner wasn't working right so I fixed that too. I think that the part I like most is taking something that someone feels is junk and getting it working again with a little bit of work and very little money. If anyone reading this is interested in old lanterns check out this site and hop on eBay. There is always inexpensive lanterns on eBay and the guys at that site will be able to help you get it running. I'll post a picture when I get that old lantern running.
Posted by Zack at 10:38 PM 1 comment:

Hello everyone. I was trying to figure out Dreamweaver tonight and got lazy, so I thought I'd give this blog thing a shot. Hope you like it.
Posted by Zack at 10:29 PM No comments: