As I mentioned in the last post we went to Moose Mountain Provincial park to do some camping. Here is the link to google maps. The green arrow on the map is pointing at the resort town of Kenosee Lake. I couldn't get google maps to show the campground. To the left of the town is the campground. We were staying between the large lake (Kenosee lake) and the smaller one to the left. That smaller lake is little Kenosee lake. It is amazing how many smaller lakes there are around there. They were left behind when the glaciers receded.

Make the long drive. It is around 500kms to get to Moose Mountain from Saskatoon and it took us 5 hours. Most of the way is good highways. Leaving here you drive to Regina and then take the trans-Canada for a while. There is only about 50kms on the #9, which wasn't that bad really. We got there about 3 in the afternoon and set up camp. 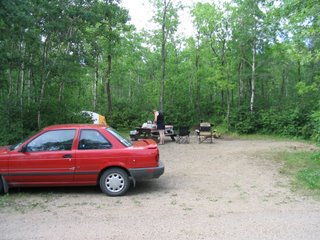 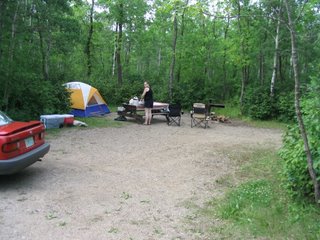 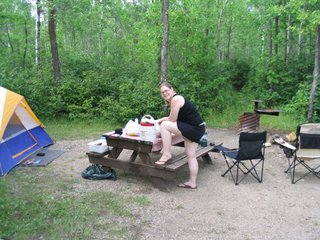 Now being the gadget freak that I am I had to try to see if I could pick anything up on my weather radio. 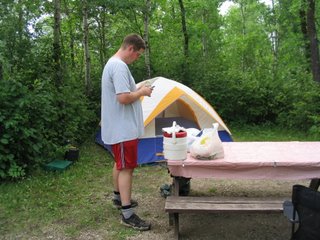 We didn't do too much that evening. Finished setting up camp and cooked up some smokies for supper on the fire. After supper we got a bit bored and went for a walk. Not too far from our camp was a nature trail that went though the woods along little Kenosee lake. We saw a deer when we were on the walk but we didn't bring the camera along. We were able to get within 25-30 feet of the deer without a problem. Then something spooked her and the flag was up and she was gone. Other than the deer there was a lot of wild life around. 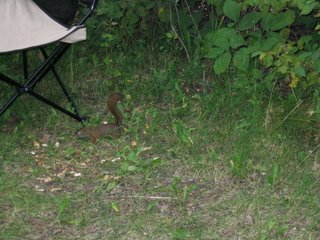 This is the resident squirrel that hung around our camp site cleaning up after my messy peanut eating. He would come by quite often and would even fight off the other squirrels that were trying to move in on his territory. He ate quite good while we were there. As well as the peanuts he got raw carrots and potatoes and cooked carrots and potatoes. I don't know if squirrels will eat those but atleast they will decompose on their own. There was also a rabbit that frequented the campsite but neither of us could get a picture of it as it was quite skiddish. It was usually sniffing around in the morning, perhaps knowing that the squirrel was smaller than him.

This was our exploring day. We started it off with a swim at the beach. 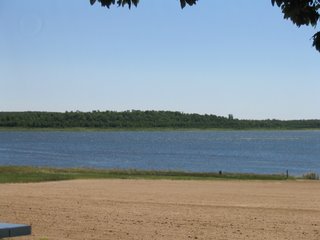 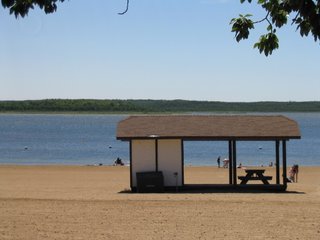 We drove around the park and went into the village. I found some cheap micro brewed beer there that was quite good. I was going to bring some home but I drank it all and forgot to buy more. 500ml for 2.25 isn't bad for beer that doesn't suck. While driving around the park we found a great look out point above Kenosee lake. 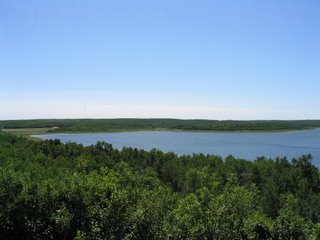 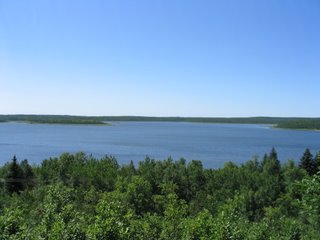 We also made the trip into Carlyle because we read in a local news paper that the Carlyle Bakery's cinnamon buns kicked ass and they were good. A dozen for 3 bucks. Not too shabby considering that they were great and didn't have any raisins! I hate raisins. The trip to Carlyle took us through the White Bear First Nation and we found some odd Road signs. 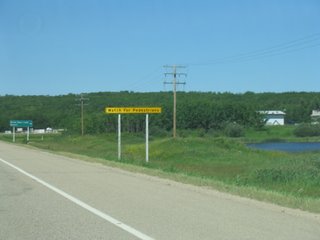 When you enter the white bear territory there is a sign that welcomes you and shows off the attractions like the casino etc. and right behind that is a sign that reads "Watch for pedestrians Next 10 KMs" and then you get one of these signs every 2 kms through the reserve. They appear on both sides of the road but only inside the reserve. I cannot figure this out. Why is there all this pedestrian traffic in this area? Do the natives not own vehicles or do they have some death wish and insist on walking on the highway? It baffles the mind. By now the whole day was pretty much done so we went back to camp and ate some cinnamon buns and made the supper fire.

Time for the slides! I didn't get any pictures of the Kenosee Super Slides but you can visit their website. I didn't want to take my camera in there and leave it unattended and risk getting it wet so you'll have to use your imagination as you read. I apologize if my writing sucks but I'm not a writer so too bad.

The good:
The free fall was a blast. 80 feet straight down and it only takes 3 seconds! Now when I first saw it I didn't think it was that bad. From the ground it looked pretty tame but when I got up there I had to lean out to see the slide. The first 20ft is actually vertical. You fall for the first 20 ft and then the slide catches you. The fun begins after that because you start to go faster than the water and I kicked up a huge bow wave/spray. It must have been over 6 feet high. You also get a monster wedgie from it.

There is a nice slow canal you can float around in on tubes to relax and recharge. This is nice but it does not replace having a pool.

The other slides are pretty normal.

The paths to the slides are concrete that was brushed to make it non-slip. This also turns it into a cheese grater for soft pink feet. I had to give up before I was completely exhausted because it hurt too much to walk to the top. Speaking of walking that sucked all the fun out the free fall. You walk way up this hill for a 3 second ride down it. Atleast the tube rides took long enough that you didn't feel ripped off.

No pool sucked on a hot day. There was a shallow canal and a hot tub. The canal was fun but it was hard to cool off in. Also you have to rent the tubes to float around the canal for $5. I'm already paying $20 a head to get in I think the tubes should be free.

Overall I would give this park a 7. They were no where near as fun as the Atlantis waterslides in Vernon BC.

Needless to say we were pretty tired after that so we just hung around the campsite most of the afternoon. After supper that night we went back to the nature trail in search of that deer. This time we were armed with my camera. We did not see the deer but we got some awesome shots of Little Kenosee lake at dusk. 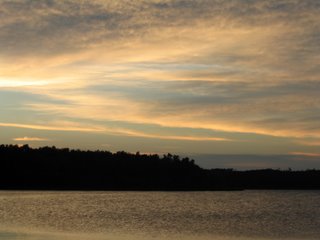 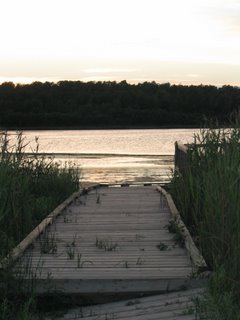 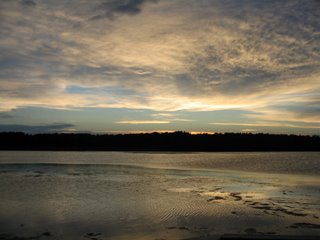 Later that night it decided to storm on us. It started off as some nice distant lightning but soon moved upon us and sent us into the tent. Lindsay was afraid the tent was going to blow down but I assured her that with my fat ass in it the tent wasn't going anywhere. It rained on and off all night but thankfully it stopped in time for us to pack up. All that was left was the drive home and that was pretty uneventful.

Would I go back to Moose Mountain? Probably not. I'm glad that we went and that we experience one of Saskatchewan's oldest provincial parks but I didn't really like it that much. When we went to Green Water we didn't start the car for 3 days because we could walk everywhere. At Moose Mountain the store and beach were 5km's away from the campground so it seemed like everytime we wanted to do something we had to start the car and plan our trip. The slides were outside the park and down the highway, definitely not in walking distance. I guess this all made everything feel less relaxing and more rushed. Even with that I had a ton of fun and I think Lindsay did too.
Posted by Zack at 10:11 PM