It's no secret that I'm a huge Alton Brown fan, I even got to meet him once, and I like to try his recipes from time to time. Today I'm giving his cheese beer bread recipe a shot. On Good Eats he recommended a hoppy pale ale so I grabbed my last home brew IPA and I'm crossing my fingers.


The bread is in the oven and hopefully I'll remember to take a picture of it.

Well it turned out pretty well I think. 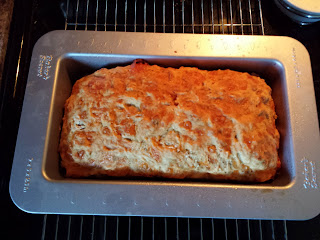 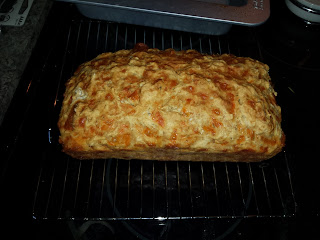 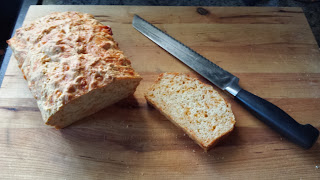 Overall this was a pretty good recipe. It was easy to make and I had everything on hand to make it. I used bread flour instead of AP because I like to and I always have it on hand. For beer I used a homebrew IPA that is very similar to New Belgium's Ranger IPA. I think the pine flavours in the beer worked really well with the dill in the bread. I also shredded too much cheese, I put about 5.5 oz in instead of 4.5 but too much cheese is never a problem. I think the best part is how fast it is to make. I had the dough ready by about the same time that my oven finished pre-heating.
Posted by Zack at 10:33 AM