I've been making home brew with one of my co-workers for a while. We've made about a half a dozen batches and bottling is a bit of a pain. He got a Danby kegerator and decided to make it a two tap system. I don't have any pictures of the process but it was pretty straight forward. We mounted the tower to the top, put the taps on, plumbed the gas side, and plumbed the beer side. After we put the beer in the kegs we set the CO2 pressure and it is good to go. The beer needs to sit under pressure for a week to get properly carbonated but it's still faster and easier than bottling.

I think it turned out pretty well. 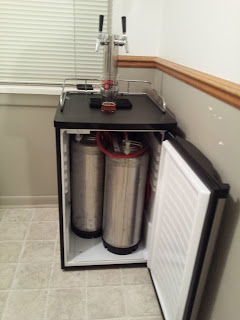