The reason I was testing out timelapse with the raspberry pi is I had a project in mind. My wife bought these hatching dinosaur eggs for my son's birthday party and it was pretty neat. You put it in a container of water and it took about 4 or 5 days to hatch. I figured that was a perfect opportunity to try this out.

I'm betting on 5 days but to hedge my bets I've doubled the amount of images I'm going to capture. So instead of assuming 10fps I'm doing 20fps. That way if the egg hatches twice as fast as I expect then I'll still be able to make a usable video. If it takes the full 5 days then I should have a smoother video. In case you're wondering 5 days is 432,000,000 milliseconds.

Here is the setup: 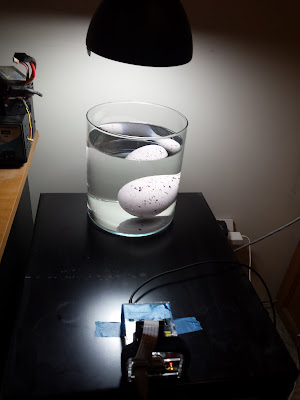 It took me about 5 attempts to get started. I initially just ssh'd in from my ubuntu box but I got worried thinking about the amount of time this is going to take. There is an option in putty to send a keep alive packet so the connection doesn't time out but I'm pretty sure if putty crashed I'd still lose my running proccess. I did some googling and decided to skip screen and use tmux instead. This way I can fire up my remote process, detach from it, and close my ssh window. If I want to reconnect I just ssh back in and type 'tmux attach' and it will attach me back to the running session. Pretty sweet. So as long as the raspberry pi doesn't freak out in the next 5 days I should be good. I can periodically check in and make sure it's still writing image files to make sure it's still going.

Here is what the first image looks like. It's a little out of focus because of the space I had to work in. They're just too close together. 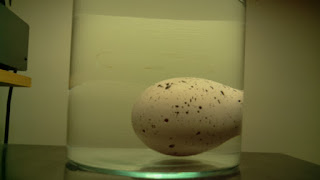 A little distortion from the glass but I'm hoping it'll still work. I'll try and post updates as it goes.

Bad news. I know I promised updates but my pi has decided it doesn't want to be on the network anymore. For some reason the wired ethernet has disconnected from the network and now I can't ssh in. I plugged in a monitor and it looks like it's still taking pictures so I'm going to leave it but it's going to be a surprise when I finally get to see the images.

Final update. Very bad news. It looks like when the pi dropped off the network it must have frozen because I didn't get more than about 30 pictures and they all look like the image above. I think I'm going to try again with my Pi2. I'm letting it run right now to see if it stays on the network for a while. If it's still up tomorrow I'll try to redo the egg hatching.
Posted by Zack at 1:38 PM