We cleaned out some old locations at work and found some goodies. Some were interesting but useless like the original manual for an IBM XT PC from 1983 and a manual for MS Basic from 1982 but the money was 4 IBM model M keyboards.

Those are basically the holy grail of mechanical keyboards. Buckling spring switches make for some awesome tactile feedback and some great sound to annoy your co-workers. Luckily they were the PS/2 versions so it's pretty easy to adapt them to modern computers. 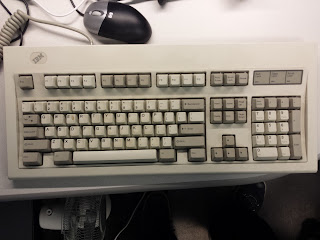 I've got a reputation at work for being a keyboard snob. I can't help it if a quality keyboard makes typing a little better. I use a Das Keyboard Professional S at work with brown Cherry switches. I've put o-rings on the switches to dampen the sound a bit. I think it's at a livable level but if they ever complain about the noise I'll just start using the model  M and they'll forget all about my browns!
Posted by Zack at 11:22 PM