After I found that picture on my computer I decided to go wardriving again. Here are the results. 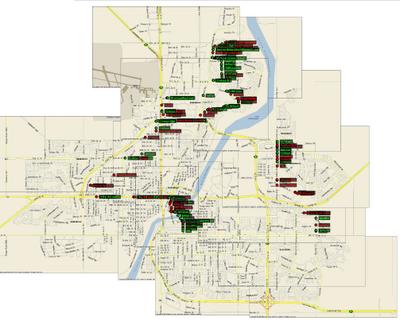 I found about 290 hotspots and half of them were wide open. Unfortunatley kismac isn't exporting the map to jpeg properly. There are many on 8th street that don't show up on this map. I also find some of the SSID's funny. One had a guy's email address and another, which was open, was a person's address. So if anyone is interested there is an open hotspot at 250 Russell Road. There was another SSID that was a person's phone number and one person thought that they were a FBI mobile operation. Its great when you find some that shouldn't be they way they are. I've seen a few around that were obviously changed by some other wardriver. I've seen a few that said "Encrypt me!" and "pwned" "hacked". I wish people would try harder to keep things secure.
Posted by Zack at 9:55 PM

Thats awesome...I just got a laptop the other day and I enjoyed my first wardriving experience in Saskatoon as well....I live up a little past Lawson...There are sooooo many unsecured networks in my neighbourhood. Keep on exploiting the cities weak spots and enjoy doing it....we should create a high res map of the city for ppl to use if they really need the net on the go or something like that.